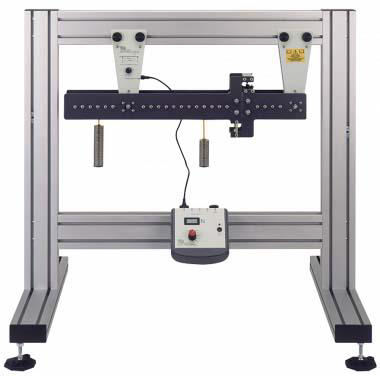 A length of material supported horizontally and carrying vertical loads is called a beam. The loading causes bending and transverse shearing. The loads and reactions are the ‘external’ forces acting on the beam. They must be in equilibrium. However, the strength of the beam depends on ‘internal’ forces. This experiment demonstrates the nature of these internal forces and their dependence on the external system of forces.
In the Sci-tech Shear Force Apparatus Model MT 072, the experimental beam is in two parts, joined by a pair of ball bearing rollers running in flat vertical tracks

• To perform a range of experiments designed to both demonstrate and experimentally confirm basic engineering principles
• To observe the action of shear force at a section in a beam and to compare the measured and theoretical values
• To comprehend the action of shear and moment of resistance in a beam
• To consist of 2 simple supports; a rigid aluminum alloy beam cut into two unequal lengths, with a frictionless hinge at the joint which permits minimal vertical movement, whilst allowing bending
• Analogue spring balance measures direct force at the ‘cut’ section
• Multiple load positions achievable
• To be bench top mounted
• Set of slotted weights included 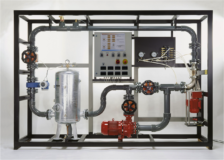 The core piece of the experimental plant is the Sci-tech Axial Turbo-machine Model FM 87 with attached motor/generator. 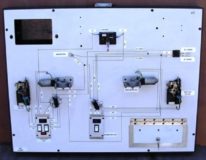