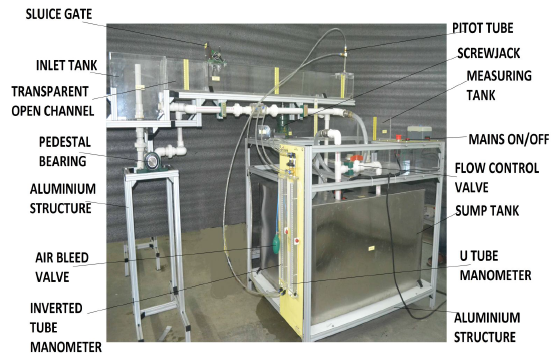 Sci-tech Sedimentation Demonstration Channel Model FM 75 allows demonstration of the full range of bedforms that arise in a mobile bed as the flow and/or slope are increased. The channel can be used to perform most of the experiments and demonstrations usually undertaken in much larger laboratory flumes, but at much lower cost and without the need for technician back up. The equipment is portable, and therefore may be used in the classroom as well as in the laboratory. This demonstration flume can play a useful role in any course concerning the mechanics of open channel flow and sediment transport, including those in departments of civil engineering, geology and physical geography.

Depositionary features and facies:
The deposition of sediment load can be observed and the resulting patterns of grains within the sand body (such as cross bedding, foreset beds etc) may be identified. The significance of such features when found in geological records can be discussed.
Local scour:
Scour under boils and vortices in the flow is observed under both the lower and upper regime bedforms. Artificial obstructions may be introduced to represent bridge piers, revetments, sills or other man-made structures, and the resulting pattern of scour examined. Two such models are included.
Model bridge pier
Flow structures:
The structure of turbulence in the flow may be examined using dye injection (dye injector not included). This is particularly interesting for the dune bedform configuration and clearly demonstrates separation on the lee face. Bedform hysteresis: If the discharge in the flume changes quickly, there is insufficient time for bedforms to adjust to the new flow regime. Hence, if a flood hydrograph is simulated by increasing and then decreasing the discharge, different depths (stages) will occur for the same discharge on the rising and falling limbs. This effect is of major importance to gauging stations on sandbed rivers. It is easily and clearly demonstrated in the flume. Computational work: In addition to illustrating flow and sediment phenomena, the flume can be used for basic data collection and numerical evaluation of the following:
• _Flow resistance:
_Manning, Chezy and Darcy – Weisbach friction factors for various bedform configurations
• _Bedform prediction:
Hjulstrom diagram (velocity)
Bogardi diagram (shields parameter)
Simons and Richardson charts (stream power)
Leeder chart (boundary shear stress)
Movement by suspension (suspended load)
• _Initiation of motion:
Hjulstrom’s curve
Shields diagram
Flow over a fixed gravelbed:
The flume cannot transport gravel, but can be used to investigate flow resistance in gravel and polder bed rivers. The flow resistance coefficients may be calculated using equations, (such as those of Bray, Limerinos, Hey, Lacey, Thompson & Campbell, and Bathurst), and the results compared to the actual values obtained by observation. It is recommended that users obtain actual gravel material from local sources (gravel not supplied).

Bedforms in sand
As water flows over sand in a river or on a beach it exerts a shear force on the bed. If the flow is strong enough, sand grains are lifted to roll and bounce along the bed. The shape of the bed responds to this motion by transforming into ripples. As the energy of the flow and transport rate of sand increase, the bedforms change. Ripples are replaced by larger dunes. At higher energy still, the dunes are washed out to produced a flat bed and in extremely energetic flows anti dunes appear. Bedforms are important in affecting the flow of water and movement of sediment in rivers and on beaches. They also occur in deserts due to the movement of sand by the wind. Bedforms are preserved when sand deposits are turned into sandstone by geological processes. They are used to reconstruct environments under which the sand was deposited.

Specifications
A transparent, inclinable flow channel through which water can be re-circulated by a pump over a mobile bed to demonstrate the whole range of bedforms from incipient particle movement to bed wash-out
Three different discharge rates can be selected (and measured) within the range 0.2-0.6 l/s
The channel slope can be adjusted within the range 0-10%
The working section of the channel is 1.55m long, 78mm wide and 110mm deep
The equipment is self-contained and may be bench-mounted in either the classroom or laboratory by virtue of its portability
A model undershot weir and bridge pier are included for local erosion demonstrations
A water level gauge is supplied to calibrate the overshot weir 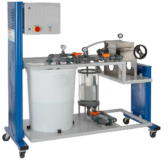 Plate and frame filter presses are used in the beverage industry, for example, to clarify intermediate products.

Sci-tech Filterability Index Unit Demonstrator Model FM 64 is demonstrating the filtering process through a porous media. It enables a water quality test to be made on a suspension to be filtered through sand or similar granular media. This un [...]