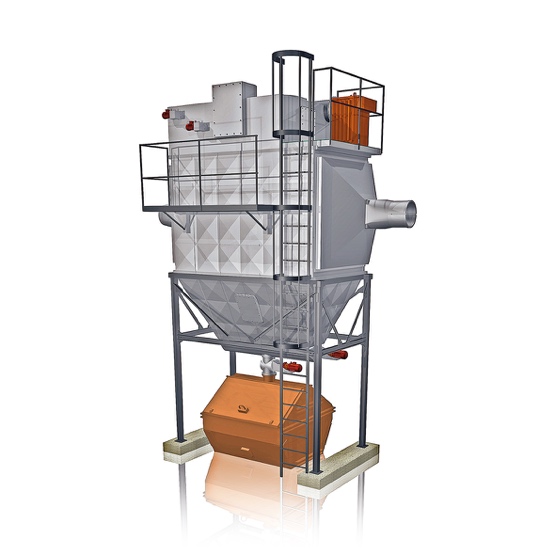 First it is necessary to charge the dirt. This is done in the ionising section, which consist of plates called spiked ionizers. The plates are charged to a very high voltage, some particles stay on the plates but most of them pass to the collecting cell.
The collecting cell is constructed in parallel plates; it uses alternate charged and earthed plates, without any charged lackage. The charged particles travel between the plates, bouncing off the positively charged plates until they hit a negatively charged plate where they stick.
The dust particles stay stuck to the collector plates until they can simply washed off during maintenance routine or in automatic wash system.
The electrostatic principle is most effective on very small particles, as the charge which can be carried on a small particle is higher in relation to its mass than the charge on a large particle. Consequently it is an advantage to remove the large particles before the electrostatic stage and this is done by a mechanical pre-filter.

An centrifugal electrostatic precipitator (ESP) is a particulate collection device that removes particles from a flowing gas (such as air) using the force of an induced electrostatic charge.
The charged particles are attracted to and deposited on plates or other collection devices.
The collectors (and emitters) are shaken by suitable mechanisms to dislodge the accumulated dust, causing it to fall with the force of gravity to hoppers below. The dust is then removed by a conveyor system for
disposal or recycling.
Air flow Rate: 15 LPM
Particle filtering Size: 100 microns approx or Equivalent
Filter Plates: 04 nos
Electrodes: 02 nos
Electronic Vibrators: 04 nos
High Voltage generators: 2 nos 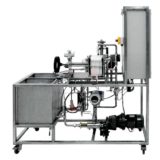 Sci-tech Automated Pilot Plant with Filter Press and Micro-filter Model ENV 016 is provided with a filter press and a microfilter (tangential filtration) that are fed by a screw pump connected with a tank filled with the solution to be filtere [...]